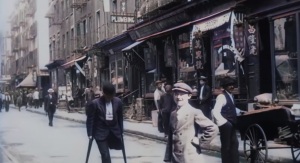 New York is ever-changing and even though we live in a very different time, nothing makes the past feel more immediate than video. This footage, shot in 1911 by the Swedish company Svenska Biografteatern, was first restored by MoMA in 2018 and now again by video editor Denis Shiryaev. It shows different neighborhoods all around Manhattan, with much of the same architecture and landmarks that we still see today. And while it’s fun to see all the things that are different (the clothes! the cars! the signage!), it’s even more interesting to feel that we’ve walked the same roads as so many others who came before us and loved this city just as well.

To combat the ever looming climate change, a new campaign is gaining traction: planting 1 trillion trees. A new ambitious project under the World Economic Forum launched in January called 1t.org has set to achieve this goal. If achieved, this would be a tremendous step forward in combating climate change. According to Fast Company, “a 2019 study estimated that restoring forests with around 1.2 trillion trees could store more than 200 gigatons of carbon”. Currently, the world looses a U.K. sized chunk of forest every year, sometimes for the sake of products such as hamburgers and shampoo. One of the problems is cutting down trees more rapidly than they are able to mature. In some cases, forests are able to regenerate on their own by placing fences to safe guard them. It is more important to keep existing trees safe than planting new ones. For example, the Amazon forest to protect young trees from cattle. Another problem lies in efforts of monitoring trees daily, which often times falls short. Fast Company estimates that “planting 60 billion trees will cost at least $4 billion a year to finish the campaign within 20 years”. To combat the high cost, governments could implement incentives similar to those in the solar industry, where landowners quickly plant and maintain trees. Pachama is a startup that uses drones and satellite imaging to track how trees grow and their carbon storage.  According to Justin Adams, the director of the Tropical Forest Alliance at the World Economic Forum, “we’re scrambling to really sort of figure out what are the workstreams that need to be in place to actually measure those commitments, track progress against those, so that by . . . next year, we will be able to talk more explicitly about how that would all work.”  There is no doubt that this initiative has sparked momentum throughout the world as we continue to combat climate change.